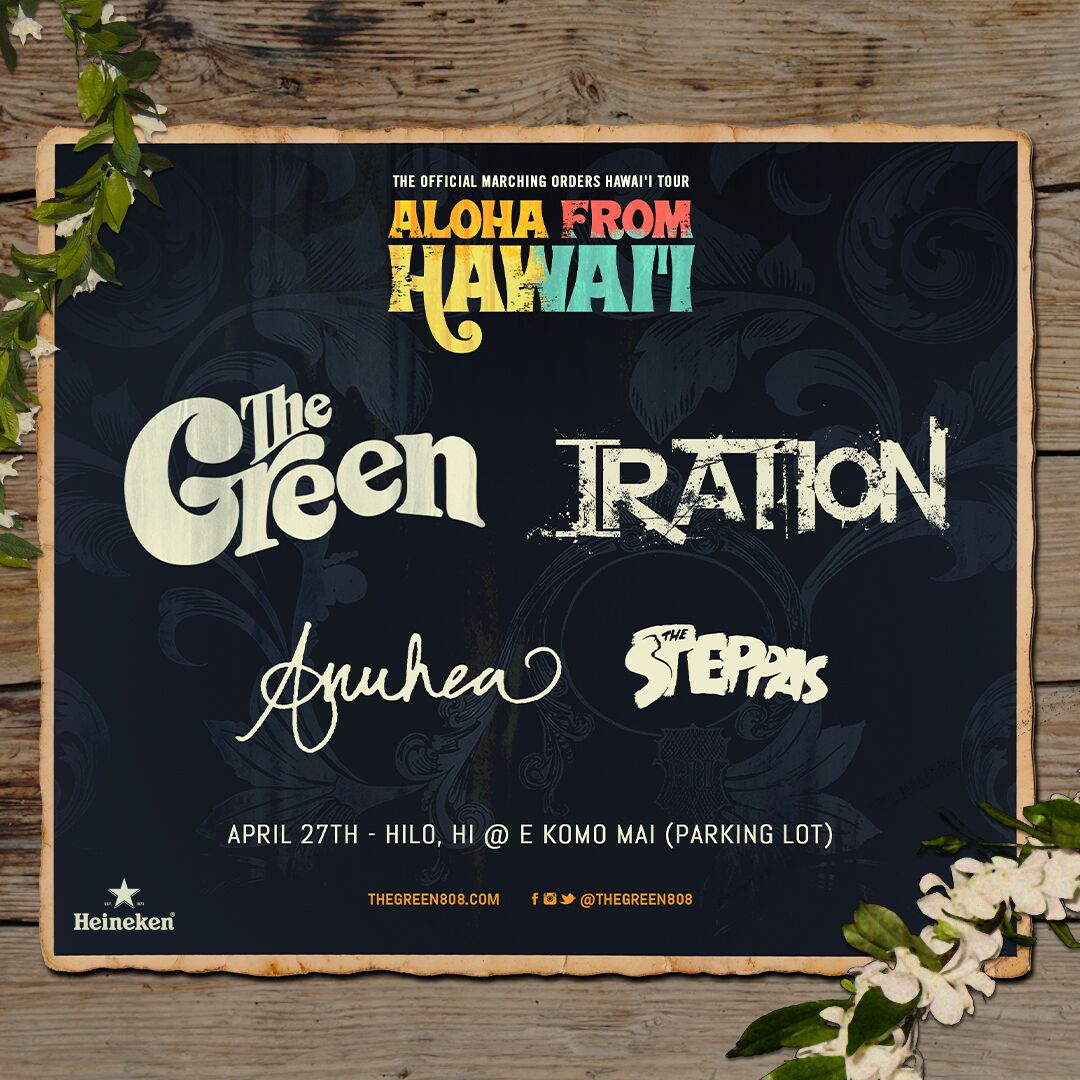 Music has been a blessing since the beginning for the humble members of The Green.  It is only by looking into the past that one can fully grasp the immense accomplishments and unparalleled journey for a small group of musicians from the island of Oahu.  Countless miles of touring and 4 studio albums have led them to become recognized as ambassadors of Aloha, helping represent Hawaiian people and culture to the world through their craft.

Since forming on O’ahu, Hawai’I, in 2009, The Green has become one of the most successful and beloved bands in the reggae genre.  During their relatively short career, the band has been awarded a Best Reggae Album nod from itunes (2010, for their self titled debut), 3 coveted Na HokuHanohano awards in their native Hawai’I (2014, including group of the year, Reggae Album of the year and Entertainer of The Year), and 2 #1 Billboard Reggae charts debuts, along with charting on the Billboards top 200.  Not bad for a band that was formed by 6 members of Hawai’I’s tight knit music scene to record a few songs and have some fun.

The Green was one of the first Hawaiian reggae bands to tour extensively on the mainland, as well as going further afield to New Zealand, Japan and other locales.  Before becoming a headliner on their own, the supported bands like Rebultion, Iration, SOJA, Bruno Mars, and Damien Marley, as well as performed at acclaimed festivals including Vans Warped Tour, Wakarusa, Sierra Nevada World Music Festival, and California Roots Festival.

Iration is an alternative / reggae group of musicians formed in Isla Vista, CA A deep-rooted reggae influence is fused with elements of rock and pop to create smooth original sounds – “we’re all about luv”, states the band

Iration has been touring nationally since 2008n performing at national festivals like Lollapalooza, Outside lands, Hangout, and many others. These Hawaiian-bred musicians look forward to spreading their original sound and Aloha spirit all the while never forgetting to get a surf or round of golf in when possible

Anuhea is a self-taught guitarist, singer and song-writer born on the Hawaiian island of Maui. Anuhea blends Pop, Reggae and R&B with engaging conscious lyrics to create a style truly her own.

Her debut album Anuhea hit the top ten on the iTunes Pop charts and World Billboard Charts. In 2010 Anuhea won Most Promising Artist and Contemporary Album of the Year at Hawaii's prestigious Na HokuHanohano Awards. She performed alongside her inspiration Jack Johnson at the Kokua Festival in Honolulu, and has toured with The Green, SOJA, Trevor Hall, and the Rebel Souljahz. Anuhea has shared the stage with artists Bruno Mars, Pepper, Al Green, Babyface and performed the Halftime show for the NFL ProBowl. With the help of her fans, she successfully funded her 2nd album "For Love" on Kickstarter, and released it in February 2012. Continually touring throughout 2012 and 2013, she used the some live recordings to release "Butterflies: Live", a fun live album especially for her fans in 2013.

That November, to the surprise of many, Anuhea gave birth to her son, 'Ikena Jack. Balancing the mommy and musician life with grace, 'Ikena goes everywhere with Anuhea and her band-- He just turned one, but has even been on tours to California, the Pacific Northwest, Australia, New Zealand, and Tahiti!

Collaborations with artists like SOJA & J-Boog ("Easier"), Tarrus Riley ("Only Man in the World") Justin Young ("Forever Summer"), New Zealand's Awa ("Perfect Day"), and her best friend Kimie ("Haters") have all been released in the past three years.

Anuhea's been collecting inspiration for a full year now, and is excited to get back in the studio to record a collection of songs that will showcase her growth as a person, a mother, as well as a musician. New songs will be released starting in March 2015.

These terms and conditions are a binding contract between yourself and TANTRIQ ENTERTAINMENT. AGREEMENT OF THESE TERMS IS EQUIVALENT TO A DIGITAL SIGNATURE ON A CONTRACT. ALL SALES ARE FINAL. CANCELLATION OF AN ORDER IS NOT PERMITTED AFTER THE ORDER IS PROCESSED. If the event is cancelled you will receive a refund minus the Convenience charge WHICH IS NEVER REFUNDABLE. If you encounter any issues at the event, you must contact [Company Email] within 5 business days following the originally scheduled date via a trouble ticket inquiry at in order to request a refund and failure to do so will waive your right to a refund. Not all refund requests will be honored. YOU CAN NOT EXCHANGE ITEMS OF YOUR ORDER PURCHASED FOR OTHER ITEMS FROM THE WEBSITE. YOU CAN NOT EXCHANGE ITEMS OF YOUR ORDER PURCHASED FOR MONEY TO USE AS CREDIT ON THE WEBSITE. REGARDLESS OF SITUATIONS SUCH AS INCLEMENT WEATHER, NATURAL DISASTERS, EXTENDED WAITS IN LINE AT THE VENUE, FAMILY EMERGENCIES AND MEDICAL EMERGENCIES A REFUND WILL NOT BE ISSUED. All Event personnel have the right to refuse entry to any ticket holder, without a refund, for any reason at their discretion. Venue and Talent are subject to change without notice and are not grounds for a refund. Anything promised by the promoter that is unfulfilled is not guaranteed by [Company Name] and is not grounds for a refund.

TANTRIQ ENTERTAINMENT does not assume liability for damages as a result to the use of any service, product or any material found within this web site. This may include but is not limited to the use of the website system, any content or demonstrations accessed via this web site or any other site to which the web site may be linked to. We reserve the right to modify any material within this web site including but not limited to: product/ and service descriptions at any time without notice. The information posted is believed to be accurate and reliable at the time it was posted. We do not take responsibility for its use, nor for any infringements of rights and or patents of any third parties resulting from the use of the website. Links from third party websites from this site are provided solely as a convenience.

Several methods of security are used including, encryption, firewalls and other technology and security procedures to help protect the accuracy and security of your personal information and prevent unauthorized access or improper use. For example, you will note that while using some features of the web site and online services, you will need to submit a password or some other type of authenticating information.

Your privacy is respected and we work hard to safeguard the privacy of your personal data. We realize that the Internet raises questions concerning the nature, use and confidentiality of information collected about consumers. We want you to know that we apply our long-standing commitment to safeguarding privacy to our Internet activities.

Your information is not shared and we do not disclose or sell any personally information (such as your name, address, telephone number or e-mail address) collected online on via the web site with other unaffiliated companies or organizations. In the future, should we decide to share such data with third parties for marketing, it will provide notification and the opportunity for its users to indicate whether they would prefer that the Company not provide such information about them to third parties. Because this information is a critical part of our business, it would be treated like our other assets in the context of a merger, sale or other corporate reorganization or legal proceeding.

How We Use Information

Information we collect is used principally to provide you with the service(s) and product(s) you have ordered and to let you know about other offerings which may be of interest to you. Postal and e-mail address information, for example, enables communication about services offered and ordered, as well as the proper provisioning and billing of those services.Information will be provided in response to subpoenas and other legal demands, and where we believe that disclosing this information is necessary to identify, contact or bring legal action against individuals who may be endangering public safety or interfering with property or services, or with our customers' or others' use of them.

How We Collect Information

Information is collected online by asking you for it, for example, when sign up for service. A customer's name, address (postal and e-mail) and telephone number are the most important pieces of information, but we might request other information, based on, for example, individual organization marketing services.

When you apply and register on the website you accept the terms and conditions that are applicable to that particular service. We do not warrant that that any service descriptions and/or content that is contained in the website is accurate, current, complete, reliable, or error-free.

You are prohibited from engaging in any form of Internet or website abuse, including but not limited to the following:Distributing, publishing, or sending any kind of unsolicited or unwelcome email to any number of network users (commonly referred to as "junk mail" or "spam"), including, without limitation, mass promotions, unauthorized or unsolicited commercial advertising, and informational announcements, anywhere on the Internet. Posting a single article or substantially similar articles to an excessive number of newsgroups or mailing lists. Repeated or deliberate posting of articles that are off-topic according to the charter of the newsgroup or mail list where such articles are posted.Posting commercial advertising in a conference or newsgroup, unless it is specifically permitted to be posted within that group; or (e) violating the CAN-SPAM Act.

If your event is cancelled, we will refund the amount you paid for your tickets (minus order processing, service and delivery fees) using the same payment method used for purchase. If your event is postponed, we will contact you with the new date and time. All Event personnel have the right to refuse entry to any ticket holder for any reason at their discretion. Venue and Talent are subject to change without notice and are not grounds for a refund. Anything promised by the promoter that is unfulfilled is not guaranteed by the seller and is not grounds for a refund.

There are no refunds.